It’s official. We are beekeepers! 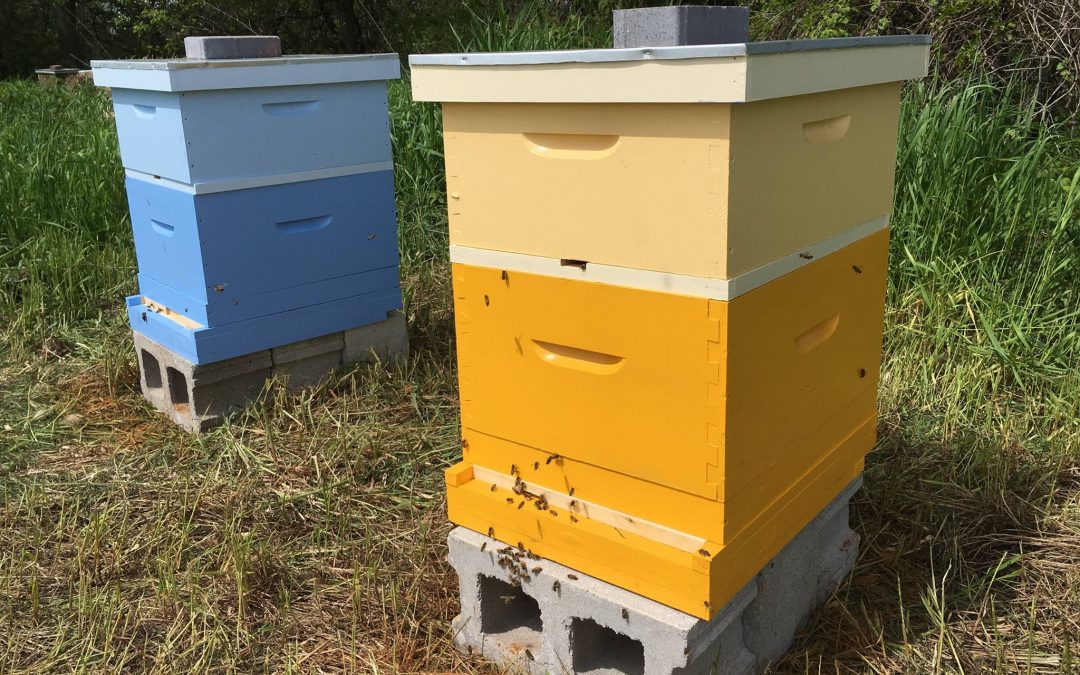 Good news everybody! Our bees moved in and they are ready to redecorate! We peeked under the top cover late on Sunday and the little ladies were already busy propolizing the tops of their frames.

How did we come to this point? Thinking back, the last 3 months have been some of the most interesting in recent memory insofar as we’ve learned a great deal and met a lot of really cool people along the way. We went from, “Hey, this could be cool.” to “Hey, this is possible. Let’s do it!” to “God lord, hurry, up and put those damn frames in the hive before the queen flies off”. We’ve taken classes; attended bee socials; stalked Facebook groups and visited countless beekeeping websites. And through it all, we’ve met many interesting, like-minded people in the beekeeping community. We NEVER suspected there were so many beekeepers in Ottawa and yet, here they are, fighting the good fight.

So, yes, it is with great pleasure that I announce that on Sunday May 28, 2017, Lauchie and I officially became “Beeks”!  And it’s like being a kid on Christmas morning.

But, before I go too far down the rabbit hole, let’s recap events of the last 48 hours.

On Saturday, a local beekeeper invited Lauchie and I to visit his apiary in Navan. As we drove up to his place just after noon, our host was in the process of chasing down two swarms.

For anyone not familiar with the mechanics of a swarm, basically swarming is when half your hive decides that it is time to find new digs. When she’s ready, the queen tells her minions to pack up their junk. Eager to please, the workers gobble up a bunch of honey and in their honey-drunk state the whole gang sets off in search of greener pastures. Because they are so full of food, they don’t travel far from the hive at first. They will find a nice branch in an inconvenient spot and they will rest for a while as they figure out their next move.

Swarms are buzzy little bundles of fun and watching one being trapped was pretty darn cool. As we watched, our host placed a swarm trap under the tree bough, gave the branch a sharp jerk and down that bee blob came—plop! Once we were reasonably sure the queen was in the trap, our host covered the box and we watched as the stragglers lined up and marched their little bee butts into their new home. Worker bees will follow their queen anywhere so once we saw them flowing into the hive, we knew the trap was a success. Ya, it was pretty freaking cool. 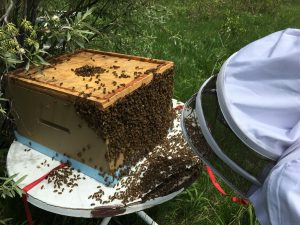 Later that afternoon, we drove home, loaded the car with hive parts and hauled everything out to the apiary. When we arrived, the grass was pretty long and needed a cut. Lauchie spent the first 15 minutes cutting the grass while I got chased around the car by a pissed off guard bee. Turns out, I cannot out run a bee. Three stings later, including one on the back of the skull (me), one on the eye brow (Lauchie) and one on the arm (me again), I am pleased to announce that neither Lauchie nor I is allergic to honey bees.

With those shenanigans out of the way, setting up our hives was relatively easy. We put down some cinder blocks, stacked two supers and added some frames in the bottom super. That evening, we visited a hiking trail near our house and collected bags of dried pine needles to use as kindling for the smoker. And that’s it. We were ready to collect some bee nucs in the morning.

5:30 am: I’ve never gotten Lauchie out of bed this early in the morning without having a pillow thrown at me, but I’m pretty sure he was already awake when the alarm went off.

Showers, breakfast, coffee, gear, gas, then off to Lacelle’s apiary in Carleton Place to finally meet our bee babies. We were told to arrive early in the morning since most of the bees would still be in their nucs.

8:00 am: Turns out, we weren’t the only eager beavers at Lacelle’s. When we arrived there was a long line of cars already parked out front. His front lawn was covered in rows of bee nucs. If I had to guess, there must have been 50 or 60 sitting out, ready to go. Paul Lacelle chatted people up as him and his companion taped up nucs. In the end, we didn’t get to choose our nucs. We just handed over our cash and Paul handed us two secured boxes of Carnolian bees, complete with an overwintered Queen. And off we went! 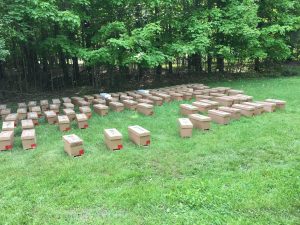 It is strangely thrilling driving around with a box full of bees in your car. I mean, what if we got in an accident? What if the tape came loose or the box burst? What if the top screen tore and our car filled with thousands of super pissed off bees? What then? This is what Lauchie and I imagined as we drove down country back roads on that sunny Sunday morning. Alas, all went well and not a single escapee. 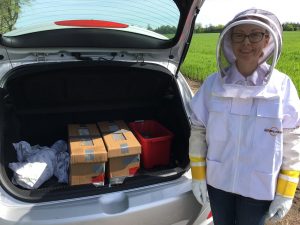 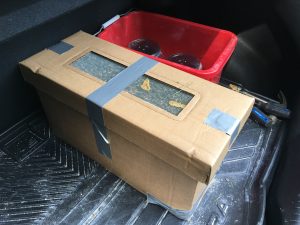 Loading frames of bees into our hives went (surprisingly) well.

There were no big surprises with Blue Skies hive. We moved all 4 frames from the nuc and placed them in the centre of the bottom super. Then we sandwiched them between empty frames on either side for a total of 10 frames in the bottom. Next, we covered the bottom super with the inner cover. The second super went on top of that and we capped everything off with the telescoping outer cover.

At the moment, the second super contains a hive top feeder filled with 1:1 sugar syrup. We used large mason jars that we got from the Bulk Barn (we punched holes in the lids so the bees could sip the syrup without falling in). The sugar syrup will feed the hive until the colony is more established in the hive. It will help the workers draw out comb more quickly. Making new comb takes a lot of energy.

Next, Lauchie installed the second box of bees in Sunshine hive. Sunshine hive is set up exactly like Blue skies hive, with a screened bottom board and two deep supers.The second nuc was PACKED with bees—it’s a wonder they didn’t revolt when we opened the box. 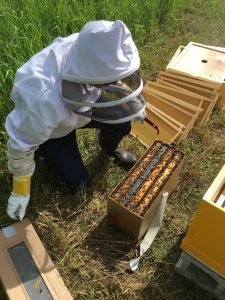 While inspecting frames from the second nuc, we came across what we believe is a supercedure cell. Supercedure cells are created by workers when they think their queen is getting weak and needs to be replaced. We debated whether to remove the cell or leave it. In the end, we decided to leave it and consult the community elders instead (a.k.a anyone who has even a day more beekeeping experience than us). The current queen seems pretty strong. She’s been laying a nice brood pattern, but time will tell if there’s a problem. We’ll inspect again next weekend. 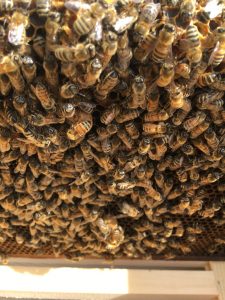 So far, no really big surprises. I think our beekeeping classes helped prepare us for the first day. I’ll admit, there was a learning curve with the smoker. We managed to create a few bonfires in our smoker. Then we accidentally snuffed them out. Then started another blaze. Eventually we got the hang of it. Lauchie’s definitely more smoke happy than I.

Ever since we put our bees in the hives, we have been anxious, proud bee parents. We drove back to the apiary on Sunday night to make sure everything still looked fine and visited again on Monday night. Monday was rainy so not a lot of activity outside the hive, but we saw two bees carrying pollen into Sunshine hive so Lauchie was feeling proud of his little buzzies. Let the competition between Blue Skies and Sunshine hive begin! 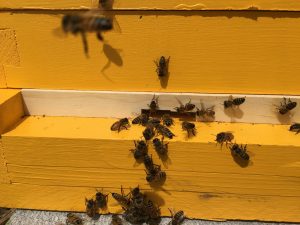 Only 6 more days until we can open the hives and check on their progress. Lacelle’s apiary posted that they have 2 nucs left (someone cancelled their order) and I have to admit, we strongly considered buying them. I think we are turning into bee addicts. It’s going to be a long week.