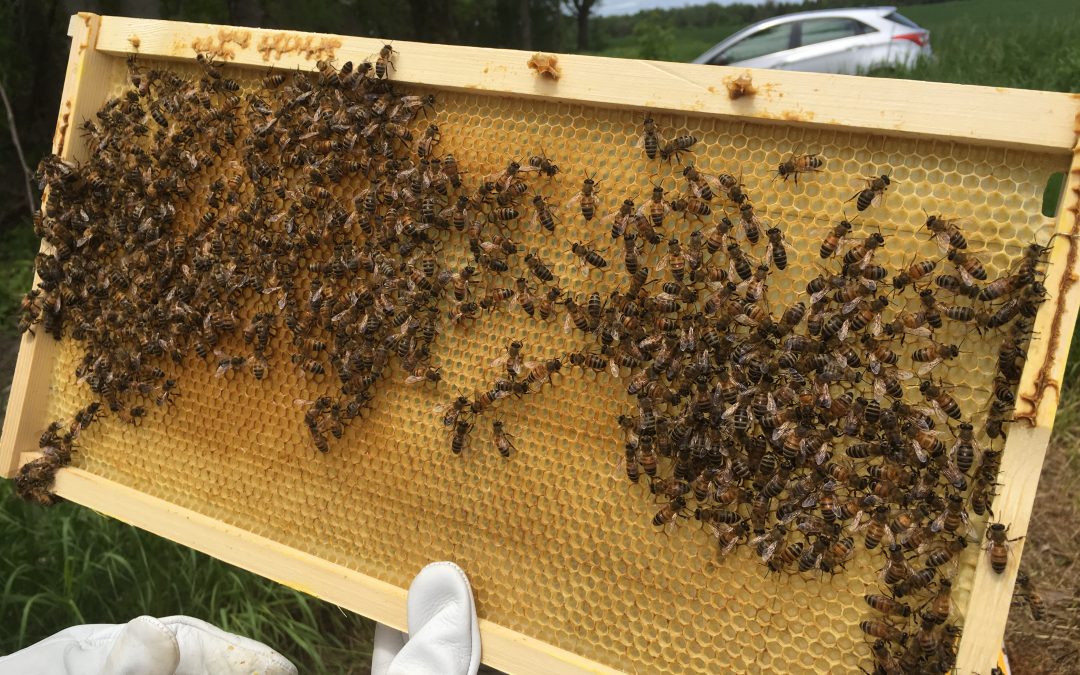 After 7 full days of waiting and wondering what the girls were up to, we FINALLY cracked the top off our hives and took a peek inside.

Full disclosure, Lauchie and I stalked our hives all week—every night we drove to the yard, donned some rubber boots and watched the bees from the outside. It was a cool, cloudy, wet week and there wasn’t much activity outside the hive during our visits so we were feeling anxious about the welfare of our colonies.

In spite of the bad weather, our girls proved resourceful. As we walked up to the apiary on Saturday, we saw loads of bees, heavy with nectar and pollen, ferrying their goodies into the entrance. It is reassuring to know that, even during a crummy week, our ladies can take care of themselves.

Before opening our hives (and disturbing the bees), We devised a plan for the first inspection. This is what we wanted to look for:

In just one week, Blue Skies has grown significantly and the colony has started drawing out comb on empty frames. They also made some burr comb on the inner cover, so we had to remove this creation before they made a mess. 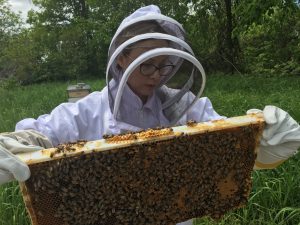 A couple of exciting things happened during Blue Skies inspection:

The Queen: We found our queen! After inspecting a few frames, we found her smack dab in the centre with her entourage. We’ve seen pictures of queen bees in our bee class, but I secretly worried that we wouldn’t recognize her in real life. Turns out, it wasn’t a problem. The queen is distinctive and once you spot her, you know it’s her. She’s much bigger than the other bees and her long bum and bald, black thorax give her away. We watched her for a minute or two then put her frame back in the hive to keep her safe. 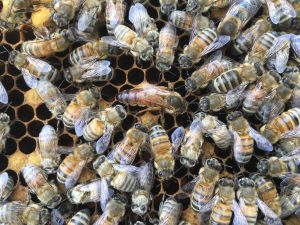 Bee dances: We caught one of the ladies doing a bee dance (or a “waggle”) for her buddies. Bees waggle to tell other bees where to find flowers. After the inspection, Lauchie got curious and did a quick google on bee waggles and found some information about the meaning of different bee movements. Based on this information, we think she was telling the colony to travel away from the sun (N/E) about 1-2 km. Curious, we looked up the location on Google Earth and found a farm. Did we uncrack their code? We may never know.

Bee bridges: We saw our bees building a bee bridge (where bees linked themselves together to form a bridge like structure in the hive) between frames.  Some theorize that bees will create these bridges as a means of measuring space inside the hive. Supposedly it helps them draw comb. Based on what we saw, we think they were just trying to keep us doppey giants from tearing apart their homes. Maybe a little bit of A and a little bit of B.

Although the Blue skies colony started small, in one week, they’ve made a lot of progress. Given time, we believe this colony will do quite well.

Sunshine hive continues to thrive. The colony is packed with bees, and the frames have lots of capped and uncapped brood, pollen and syrup and lots of new comb on the foundations.

During our inspection, we looked for the queen but never found her. We really wanted to find her because the supercedure cell we saw last week gave us the jitters. We wanted to know that she was really there.

By the time we did our first inspection, the bees had pulled down that cell. We found a few open bowl cups instead. So, at this point, we’re still not sure if something is going on in the hive. There may be a new queen running around in there. The old queen could just be shy. Or, we could be queen-less. We’re not sure. 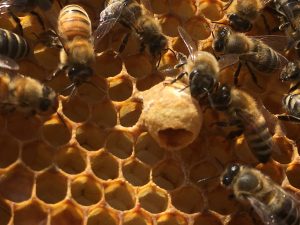 During our visit, we also saw a new bee chewing its way out of its capped cell. We tried to take a picture but the other bees kept walking on its face.

In bee class, the instructor told us repeatedly, “If you can’t find the queen, look for eggs. If you see eggs, the queen is there”. Well, turns out, spotting tiny eggs at the bottom of dark, narrow cells is actually pretty freakin’ hard. We were feeling cocky going in (Because, pffshh, how hard can it be to see eggs?!?), but we left frustrated. I’d like to have someone with experience help us check our frames during the next inspection.

With that said, both hives had uncapped larvae visible in the cells and that seems like a good sign. Larvae are only visible in frames from day 3-8 of their development cycle—after that, their cells are capped and larvae enter the pupa stage. That means that the larvae we saw in the hives during the first inspection are—at most—8 days old. So the queen must have put them there: (a) the day we got our nucs; (b) the day before we got the nucs; or (c) later in the week. So, theoretically, if larvae are visible during the first inspection (which they were) then the queen is probably present and laying. If we see larvae during our next inspection, then SOMEONE is definitely laying eggs in the hive. We’re hoping we’re right about that because we did not see eggs…

Next week, we will repeat the same inspection plan.

Lauchie’s going to bring a thermal camera to see if we can visualize the colony’s heat signature. If we can, it’s a way to check on the hive during colder weather. Stay tuned for the results of that experiment.