Secrets of the hive: Thermal images and a laying queen! 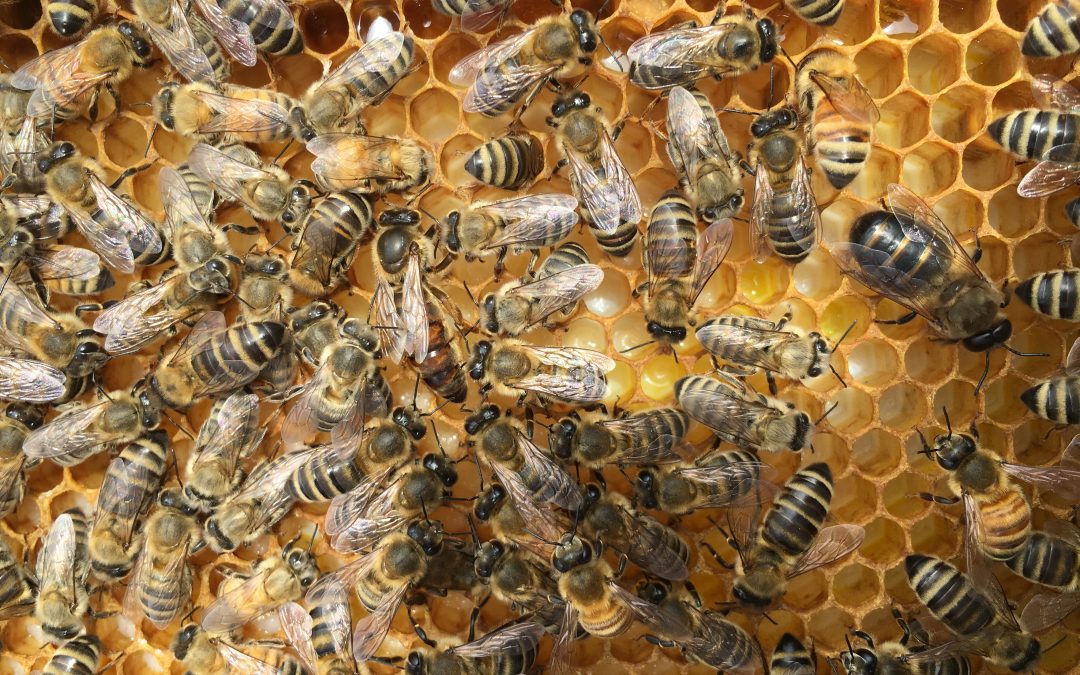 Greetings fellow bee nerds and misguided Googlers searching for ‘vees’. I’m Lauchie, Becca’s partner in life and in this beekeeping adventure. Becca handed me the baton this week to write up the Serendipibee blog. If you’ve read thus far, you can tell that Becca’s writing is styled with the well manicured precision of an artist. With me, I can guarantee the technical and precision about beekeeping that my many years as an engineer has honed – Sheldon from Big Bang Theory has got nuthin’ on me….

We arrived at our hives at 2:30 Saturday and immediately noticed the girls busily carrying pollen and nectar into the front entrances to both Sunshine and Blue Skies hives. We doned our gear in 27°C weather and rapidly learned that beekeeping is an extreme sport. Beekeeping is usually performed on sunny warm days, which means that one’s comfort may need to be set aside while managing the hives. Undeterred, we approached the hives eagerly anticipating to see the progress the girls made this week.

We first opened Sunshine hive to learn that they had emptied their syrup supply (nearly 1.5 litres) that we left for them a week earlier (thirsty little buzzers!). This syrup (1:1 sugar to water mixture) gives the bees energy and provides some material to help make beeswax so they can build new comb. This is essential as the bees need to build up their numbers and comb is needed for new brood and to store their winter supply of honey.

Penetrating deeper into the hive we checked Sunshine’s frames and were happy to find that the girls have constructed lots of new comb on previously empty foundation frames. They are busily filling them with syrup and honey. As we continue drawing frames from the hive, we discover a new frame is filled with new brood and honey – someone has been at work laying new eggs! We know the Queen is somewhere in Sunshine and we’re relieved! 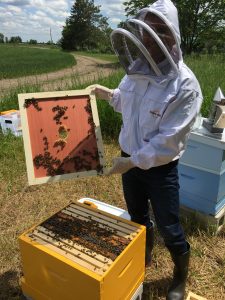 As we continue the hive inspection, we see the original, older, wooden nuc frames fully loaded with newly capped brood – this hive is ready to burst with tonnes of new bees!

Last week’s inspection had a dose of drama as we could not find Sunshine hive’s Queen. This week’s inspection of Sunshine had an additional sense of anticipation – is the Queen in the Hive? New brood on the new frames gave us confidence that the Queen is somewhere near. And not to disappoint – Sunshine’s Queen made a grand appearance and showed-off her egg laying skills! We were thrilled to watch the Sunshine Queen laying eggs with the close support of her court—we captured the action on video no less!

Surrounded by her court, and under our prying eyes and intense afternoon Sun, we watched the Sunshine Queen lay an egg – a task that she performs ~1500 times daily (about once per minute). At this rate, she can fill both sides of a frame in about 5 days! Captivated with this work of nature, we gazed at the Sunshine Queen to judge her general health while she continued her busy bee business on the comb. 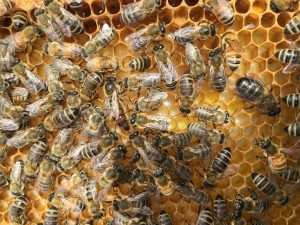 The rest of Sunshine’s inspection finished with a sense of relief that the Queen was found. Overall, Sunshine’s inspection shows that the hive is growing strongly and the girls are continuing to populate the new foundation frames. Since the bottom brood box is nearly ~70% full, we decided to add another ‘deep’ of full frames to allow Sunshine’s bees more real estate to build comb and lay eggs.

With Sunshine’s inspection complete, and with the knowledge that a classy Queen is in there laying some eggs, we continue onto Blue Skies hive.

Becca began inspection of Blue Skies hive and saw that the girls have taken a good helping of Syrup, but did not empty the mason jar supply. Becca removed the jar, and then started investigating Blue Skies’ inner workings. The buzz of the colony is mesmerizing as you lift the inner cover off of the hive. 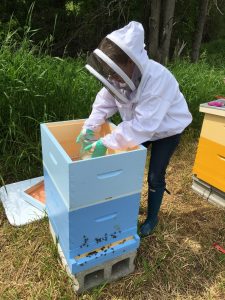 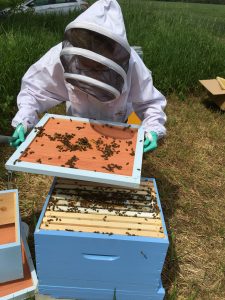 Blue Skies’ girls are busily building comb but are not at the same rate as Sunshine. Blue Skies has been busy loading the new frames with honey and syrup. The older frames show a lot of capped brood and pollen deposited by busy foragers venturing far from the hive during the wonderful summer-like weather. Sunshine is making some complex inter-workings where both brood, honey and pollen are stored in adjacent cells, sometimes in a haphazard manner. The older frames from the original nuc look promising as they are fully loaded with capped brood indicating that the hive is ready to spring larger in population.

Like their hive inspector, some of the worker bees decided to decorate the comb with their own artistic comb creations outside of the limits of the frame. Who says bees can’t be creative? They like to color outside of the lines 😊 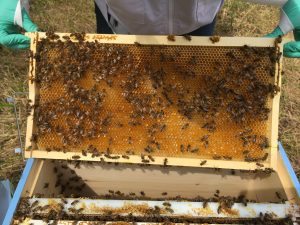 During the inspection both Becca and I searched for the Blue Skies Queen, however her hiding capabilities have outdone us this time! Even though we couldn’t see her, there was tonnes of evidence indicating her presence. Lots of tiny larva and “ta-daa!”—eggs! They were just barely visible on the comb. Since an egg cannot be more than 3 days old, we know the Blue Skies Queen is somewhere nearby.

We suspect that Blue Skies’ girls decided they need more male company in the hive despite the costs involved in hosting those lazy, honey-drinking, males in the colony. Lots of drone comb is visible in the center of Blue Skies which is a bit unusual – usually they are formed near the frame edges. Alas, we can’t second guess the collective wisdom of 30,000 bees deciding this is in their best interest for both Queen and colony. 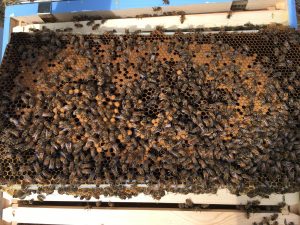 Inspection of Blue Skies finished at 3:15 pm and, with sweat dripping from her forehead, Becca started reassembly. The heat of the afternoon Sun made us realize that this job is best done mid-morning when the foragers have left for the day. During hive reassembly we noticed Blue Skies’ girls are very dedicated to their hive superstructure and stubbornly refused to move off the top cover. Becca used the bee brush (yes, there is such a thing) to coax the stragglers off the cover so we didn’t crush them during reassembly.

As a gift for both hives, we opened an upper door for the bees! We could tell their collective delight at having another entrance and exit from their hive as the girls rapidly investigated their new portals to the bee yard. Sunshine Hives’ bees were a bit more reluctant about this development and chose caution rather than joy at the modified structure of their home. I think their engineer bees were considering covering this inconvenient hive hole with beeswax and sending us the bill for the extra waxwork 😉. 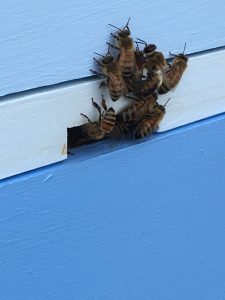 As promised, I have a special feature this week for the techies out there. I took some thermal images of the hive to see what the heat signature of bees looks like. For those who aren’t familiar with this, imagine a camera that doesn’t see light like your eyes does – but can see heat. For instance, here’s what a hot coffee cup and frozen packaged chicken looks like thermally. The coffee cup glows warm in the bottom half which contains the hot coffee. The chicken is frozen and shows as dark on the image. This is one of the neat things about infrared light – it sees things you can’t see with your own eyes. For instance, I held my hand on a table for a few minutes letting it warm. You can see the imprint of my hand on the table as the table absorbed heat. We have all felt the “warm” spot on the sofa, these types of cameras can ‘see’ this heat. Here’s some interesting things I’ve learned about bees in the infrared. The bees’ thorax and head are the warmest parts of their bodies (makes sense, this is where their muscles flap their wings and should emit energy as heat). The abdomens are cooler and show as darker on a thermal image. Bees wings are thin and are cooler than their bodies matching the ambient air temperature (28°C). The entrance to the hive is visible as the warm rectangular area. It indicates that a lot of heat is stored in the hive justifying the existence of “Fan bees” who circulate airflow throughout it. Here’s a picture of a brood frame. The brood are at a comfy 35°C which is helpful for their development. During cooler days, some bees will duck into some comb cells and vibrate to warm the brood. The brood need to be kept at a steady 35°C otherwise their development is at risk. During the next inspection, I’m going to make some audio tracks of the bees’ buzzing to see what the natural frequencies of their buzzing is. I’ll also see if we can tell when bees are happy and when they’re upset based on their buzz.

Join us again next week as we continue the adventures of Serendipi-bee! Who knows what it will bring?