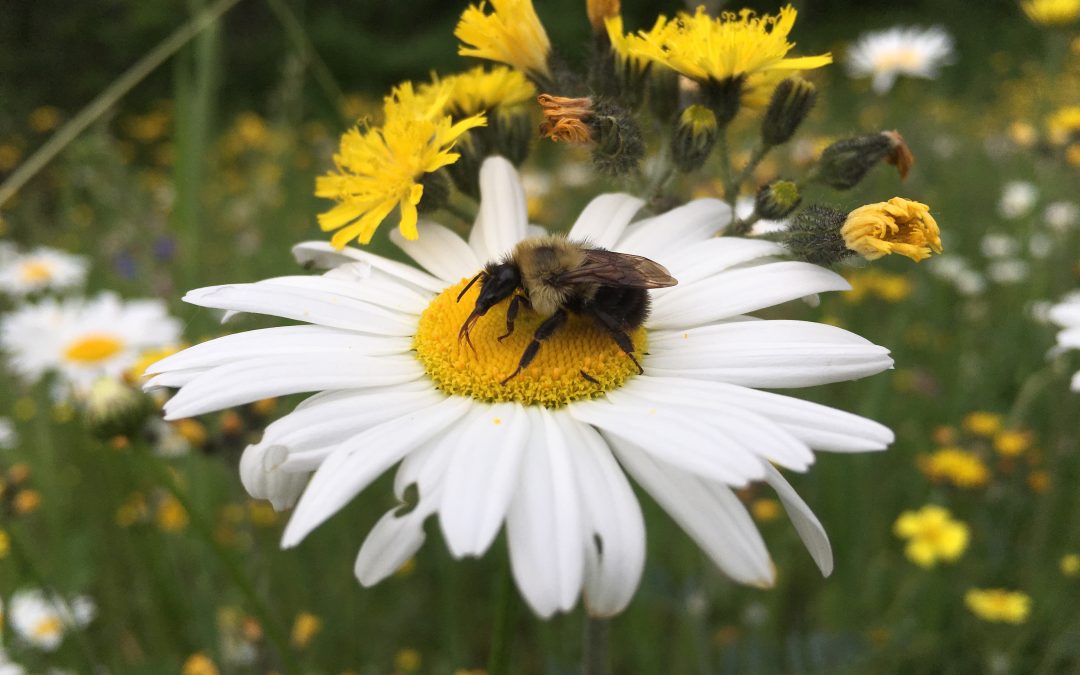 Ever wondered “what’s the difference between a honeybee and a bumblebee?” It’s a valid question.

There are several qualities these bees share as pollinators, but there are also some marked differences. In particular, bumblebees and honeybees differ in the way they build and maintain their colonies.

Honey bees (Apis mellifera) are domesticated bees which prefer to live in tall trees, and other easily protected locations. They create hives full of comb. Measuring approximately 5 mm across, honeybees fill these cells with brood, pollen and honey. Unlike bumblebees, honeybees are social insects insofar as they live and work together in large colonies.

Bumblebees (Bombus terrestris) are much larger than honeybees and somewhat fuzzier looking. Instead of living in hives, they burrow into the ground or other crevices, making shallow hives with rather haphazardly constructed comb. Like honeybees, bumblebees forage for food, however they have a greater tolerance to inclimate weather than honeybees. Bumblebees are known as  little “tanks”. They can handle a bit of rain when flying—honeybees, by contrast, cannot. Bumblebees are considered to be primitively eusocial meaning that the roles of Queen and workers are more loosely defined than honeybee hives. Bumblebee workers can lay eggs but they will supress this ability when the Bumblebee Queen is laying.

Bumblebees are larger than honeybees making them easier to spot. Their fuzzy hair helps pollination (they vibrate to pollenate), and acts as insulation helping them survive cold environments.  Unlike the nurse bees in a honeybee hive who meticulously tend to the hive’s brood, Bumblebee Queens will initially sit on their eggs, much like a bird, to help them grow. Once a bumblebee Queen produces enough workers to help with the hive, those roles change and new workers incubate the eggs instead.

Bumblebee Queens get ready for winter by finding a shelter underground.  They overwinter by entering a quasi-hibernation state called “diapause”. Once the queen emerges in spring, she feeds and begins building her new colony. The cycle repeats!

The picture at the beginning of this post was taken during a morning run. You can see that she’s quite a bit harrier than a honeybee. Look closely and you can see her proboscis, a tongue that she uses to extract nectar from flowers. Both honeybees and bumblebees have this handy tool to help them extract nectar.