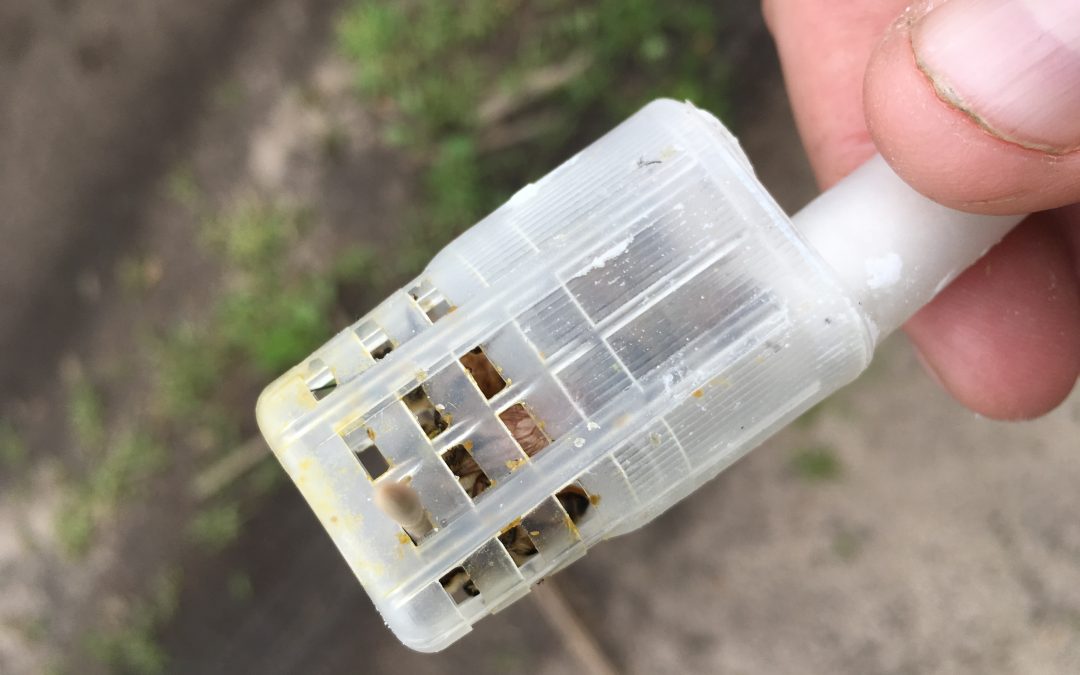 How to replace a queen

On July 12, 2017,  we successfully re-queened Sunshine hive with a new Carnolian queen, Lola, courtesy the Ottawa Community Beekeepers (OCB). Although the transition wasn’t as quick as we expected, Sunshine hive is doing well.

A new queen? But why?

But, before I describe the re-queening process, let’s recap some of the reasons why we re‑queened sunshine hive.

In the weeks leading up to this particular milestone, we noticed the following changes in Sunshine hive:

1. The population growth in the hive outpaced the hive’s ability to draw out comb on the new foundation. Because this was our first year, we didn’t have old frames of comb to add to the hive to help them and so they always seemed to lack space to store nectar, pollen and brood.

2. Over time, we started seeing less capped brood and less larvae on the frames. In contrast, workers continued to bring in lots of nectar and pollen.

4. And while all this was going on, the hive started making an insane amount of queen cells on the frames. This told us that they needed a new queen, either because they wanted to swarm or because the old queen was failing.

Based on this, we knew that Sunshine hive was in trouble. We had to re-queen as soon as possible or risk losing the entire colony. Luckily, re-queening is a pretty straight forward process.

Introducing a new queen to an established colony

If you know your current queen needs to be replaced, the first step is to find a replacement queen OR make sure your hive has queen cells. In our case, we re-queened using a newly mated queen. We’ll describe this process in more detail in this post.

Although we had queen cells in the hive that we could have used, we chose to buy a mated queen instead. A mated queen is able to lay eggs sooner than a freshly emerged queen which means that the colony will recover from the old queen’s loss much sooner. Waiting for a new queen to emerge from a queen cell takes time and there is no guarantee that the new queen will successfully mate. By the time, you learn that there’s a problem with a newly emerged queen, it could be too late for your hive. We weren’t willing to take this risk.

If you are going to introduce a new queen to an established colony, you want to check your hive thoroughly and make sure the old queen is gone. If she’s still in the hive, you need to either relocate her (to another hive) or euthanize her. In our case, the old queen was nowhere to be found so that made life a bit easier. If your hive has queen cells in it (and you’re going to introduce a mated queen), you need to cut these cells out pronto. Queens will kill each other so you don’t want a new virgin queen emerging in your hive after you have introduced a newly mated queen.

Next, you want to “air out” the old queen’s pheromones so that the colony will accept the new queen more readily. You can do this by leaving the hive queen-less for a few days (2 days is good). In our case, the queen was already gone and our ladies were ready to accept new leadership. We were able to introduce a new queen immediately.

Once all of these conditions are met, you can start the introduction process.

You need to introduce a new queen to an established colony slowly. If you open the cage and dump a new queen into the hive, your worker bees will kill her immediately. Give your bees a few days to get acquainted with each other’s scent. Queen cages are designed with this goal in mind.

Queens are shipped by breeders in tiny queen cages. Each cage contains one new queen and a few attendant bees who groom and feed the queen during transit. The door of the queen cage is sealed shut with hard sugar candy to prevent the queen from escaping. When the sealed cage is put in the hive, worker bees can climb on the cage, smell the new queen, and feed her through the bars/gaps but workers cannot enter the cage or hurt the queen. 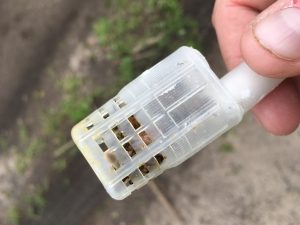 On July 12, 2017, we put queen Lola in Sunshine hive in her cage. The effect of adding a new queen to a hive that has been queenless for a while was immediate. Within seconds of securing the queen cage between two frames, bees started flowing up from the bottom brood box to investigate. And, as we watched, they lost their bloody minds. Hundreds of bees stuck their butts in the air, fanning and dancing to let their hive mates know the good news. Yes, it was quite the celebration.

It is best to leave the hive alone for 10-14 days. Stressed hives may reject new queens. In our case, we did a quick check after 4 days to make sure that the queen escaped her cage. Then we waited. It took Lola almost 2 weeks to start laying a significant amount of eggs, but during our last inspection, there were signs that she was well on her way to producing a new bee army.

And here she is making her rounds! She was marked before we got her and this has made it SO much easier to find her during inspections.

And here is a photo of some comb with eggs at the bottom. Look VERY closely. Eggs are small and white. You’ll find them at the very bottom of each cell, usually in the centre of a frame in the centre of the hive. This is queen Lola’s handy work. 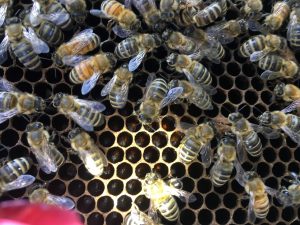 Psst…You got any queens?

So, every time we mention that we re-queened our hive, we get asked the same question: “Where in the world do you get a queen bee?” Buying a queen bee is much like anything else: you need to do your research and you need contacts. There are breeders throughout Ontario who specialize in rearing queens so it’s not hard to find one if you know who to call.

Queen Lola is a queen offspring from the University of Guelph’s Tech Transfer program colony. Their program selectively rears new queens from older queens who have proven hygienic, hardy, fertile and gentle. Because these queens are “local”, they are better adapted to our particular climate and so, in theory, they should do well. Our contact in Ottawa gets a shipment of these little beauties regularly. Because they have such a good reputation, this is our first choice for queen bees.

A queen bee costs $40-45 which, yes, is expensive, but well worth the price if your hive bounces back more quickly after a loss. Being queenless for 2-3 weeks during the foraging season is pretty significant. If we compare the productive capacity of our queen‑right hive (Blue Skies) against our queen-less hive (Sunshine hive) during the same 2-2.5 week period in the summer, there’s a marked difference in output. Blue skies hive’s production sky rocketed and Sunshine hive fell behind and to date, hasn’t really caught up.

Unfortunately, shortly after re-queening Sunshine hive, we had to re-queen Blue Skies hive as well. We were able to use the lessons learned with sunshine hive to diagnose a similar problem in Blue Skies.

Again, we believe it was a space issue. The girls started bringing in a ridiculous amount of nectar very quickly and they ran out of room. They couldn’t build new comb fast enough to house all that honey and so they started filling back-filling brood frames with nectar. Once the queen ran out of space to lay eggs, it kicked off the hive’s swarm instinct. Queen cells started appearing and eggs/larvae started disappearing.

We thought we could prevent this problem by making sure the honey supers were on in time, but alas, it was no use. Our girls just didn’t seem to like the plastic foundation frames we bought for the honey supers and they fully refused to draw comb on them. To fix the problem, we bought new frames with wax foundation and replaced all the plastic frames in the honey supers. Within days, the bees had moved up into the honey supers and started building comb and capping honey. Unfortunately, our intervention was just a little too little, a little too late—the colony continued to show signs that it wanted to swarm and the only thing left to do was remove the old queen and replace her with a new one.

So we followed the same steps outlined above. Here are some videos of this process: 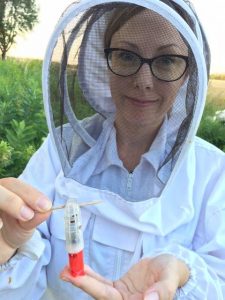 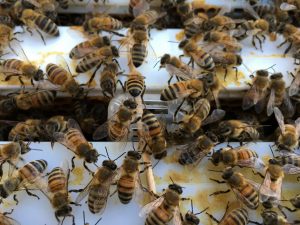 We re-queened Blue skies on August 1, 2017. In this case, we had to find the old queen, Gloria, and remove her from the hive before we could introduce the new queen, Jasmine. This process felt somewhat evil and tragic since Gloria was a really good queen and we were proud of all she accomplished this year. She raised a very gentle and extremely productive hive and neither Lauchie nor I relished the idea of removing her. In the end, we took her home and buried her body in our front yard. 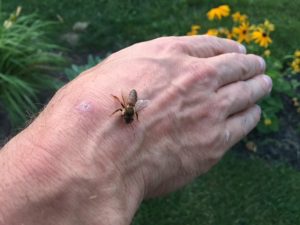 We’ll do a quick check on the weekend to see if Jasmine escaped her cage and then we will do a full check in 2 weeks to see how well she is laying. Stay tuned.

While transporting Jasmine home, we heard something kind of rare and we managed to catch it as an audio file. It’s the sound of a piping queen. Sometimes young, virgin or newly mated queens will make these weird chirping/quaking noises if another queen is nearby. Piping is like a queen’s battle cry—it lets other queens know she means business.

I should note that there were no other queens around when she was making this sound, BUT she’d just been shipped up to Ottawa from Toronto with a whole bunch of other queens. That could be why she was so vocal. Take a listen.