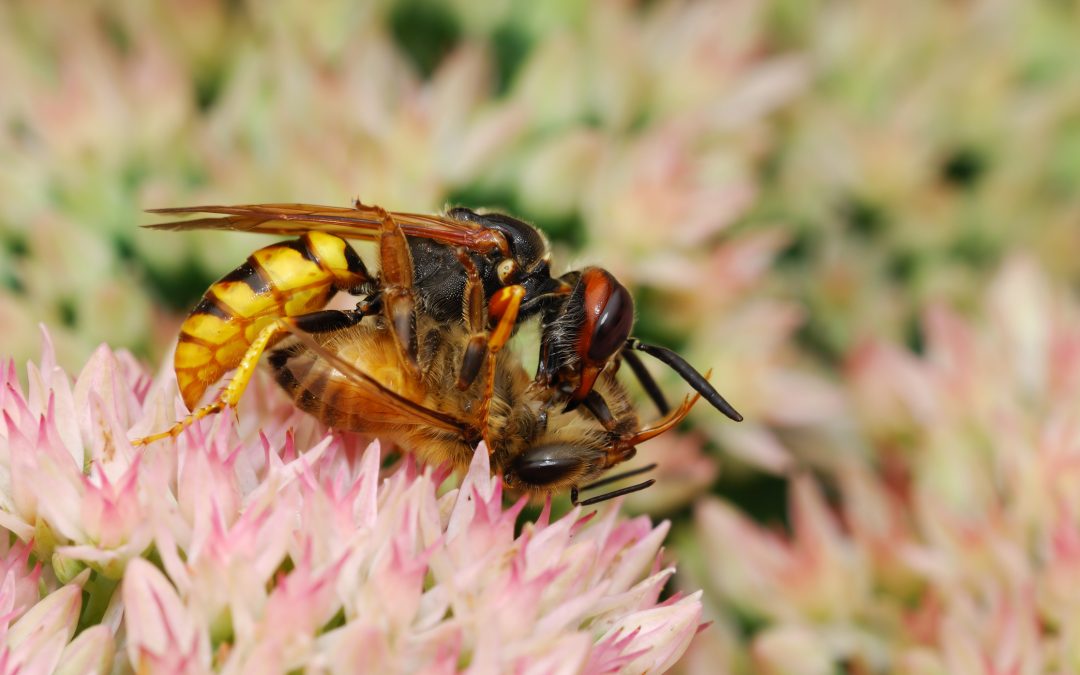 Late in the season, as the nectar flow dries up, honey bees face a brand new challenge—Robber bees. This new threat spells trouble for weaker hives.

As the dearth begins in late summer and early fall, bees from different colonies (including wasps, gah!) attack weaker hives and take their honey. Robber bees will battle a weaker hive’s guard bees, enter the hive, tear open capped cells, gorge on stored honey and take stolen honey back to their hives.

The problem with robbing

Robbing is bad news for a weak colony since robbing strains the hive’s already limited resources. Bees will fight to the death defending their honey from invaders. The continued assault on a weak hive can result in significant population losses for the colony which can further weaken the colony as it prepares for the long, cold Canadian winter. If too much honey is stolen from a weak hive, the colony may not have adequate food stores for winter and the colony can starve before spring.

We were stupid, naïve and distracted going into fall. Up until then, things had gone tIckety-boo. We thought our hives were strong and protected from robber bees.

How to recognize hive robbing

During an inspection a few weeks ago, we found evidence of robbing around Sunshine hive. As we approached our hives, a loud, buzzy hum emanated from within the hive.  Instead of the steady, efficient in and out of bees from the entrance, bees zigged and zagged as they approached and exited the hive. Sunshine hive’s guard bees battled wasps and other honey bees at the entrance of the hive. Bees tumbled and rolled mid‑air as they fought to keep opportunistic invaders out—the casualties of this deadly game lay strewn across the ground in front of the hive.

So, yes people, unbeknownst to us, a robbing frenzy had begun. Can’t lie—It was sad and depressing to see our little girls under attack, knowing full well that we could have prevented some deaths if we’d been more on the ball.

What to do if your hives are being robbed

As time went on and we tried to deal with the problem, we learned the hard way that once robbing starts, it’s hard to stop. To prevent and/or stop robbing, the wisdom of the inter-webs recommends the following actions:

As soon as we recognized the problem, we reduced the bottom entrance and closed up the top entrance so that Sunshine hive had a smaller entrance and fewer openings to defend. This slowed the robbers down but didn’t stop them completely. We continued feeding our hives using a freezer bag of syrup inside the hive so that they could replace any honey that was stolen. We also opened our hives less often to prevent their honey stores from being exposed to robber bees. After all these interventions, we noticed fewer robbing honey bees, but wasp attacks persisted.

Dealing with wasps who rob hives

For obvious reasons, we don’t want to use a pesticide around our hives so we looked into more natural solutions for wasps, including using a food grade peppermint oil around the hive to deter them. Although honey bees seem to like the smell of peppermint, wasps are (apparently) repelled by the scent. Ultimately we rejected the oil technique. It has been a rainy fall and we figured the peppermint oil would be washed away by the rain too quickly, rendering it ineffective. Plus, we thought the peppermint oil might inadvertently attract bees from other hives which is not what we want to do. So, to date, we still have wasps, but they are becoming less of a problem as the temperature drops.

Moving on from robber bees

Time will tell if Sunshine hive will survive the winter despite the robbing. They’ve been filling up comb with 2:1 sugar syrup and they still have almost 10 full deep frames of capped honey. We really hope this is enough to get them through until spring.

Fingers crossed that this stupid rookie beekeeping mistake doesn’t ultimately kill our hive over the winter.