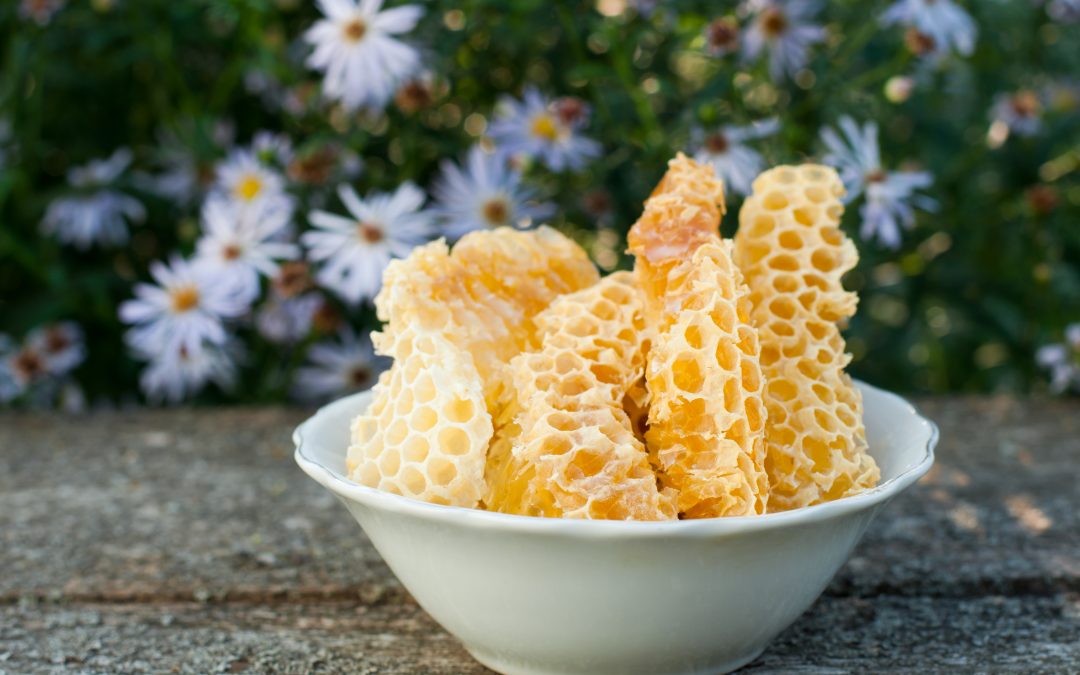 I’m going to let you in on a little secret. I’m a big fan of beeswax. Love the colour. Love the smell. There is just something about the look of beeswax that puts my mind at ease. It’s like taking off your bra at the end of the day. Or sipping at a warm cup of hot chocolate when it is cold and blowy outside. Magic.

So it might surprise you to learn that Lauchie and I didn’t start beekeeping with the intent to harvest beeswax (also known as cera alba for you science-y guys). It never even crossed our minds. Honey was the name of the game. But where there are bees, there is wax—sometimes lots of it—and eventually we had to decide what to do with it all.

After extracting honey this fall, we were left with a small bag of wax cappings that just BEGGED to be cleaned and melted down. And so we thought, why waste an opportunity to learn a new skill?  So, in December, we tried our hand at rendering beeswax.

But, before I tell you all about our little adventure, let’s first look at how honeybees make wax.

How do honeybees produce wax?

Honeybees produce their own wax—it is not foraged from the landscape. By way of glands in their abdomens, workers bees, between 10-20 days old, convert sugar from honey into a waxy, flakey/scaley substance. This waxy substance is secreted by pores on the honeybee’s abdomen (segments 4-7). After this wax is secreted, honeybees chew on it until it becomes soft and pliable. As the wax mixes with the bee’s saliva, the wax whitens. Once the wax is soft enough, the honeybee will use it to build comb inside the hive.

A honeybee’s ability to produce wax peaks when the bee is 10-16 days old. After that, a bee’s wax producing ability starts to decline.

How do honeybees use wax in a hive?

Honeybees have a few uses for wax in their hive. They use this substance to make honey and brood comb as well as burr comb. These wax structures are used to organize and control activity in the hive.

Perhaps the most well‑known use for wax in a hive is wax comb which, as you probably already know, is used to store honey or brood (baby bees). This type of comb consists of a series of repeating, hexagonal shaped cells that are open on one side. These cells tilt slightly upwards to help keep their precious contents inside.

Honey comb and brood comb look very similar when they are empty. The only significant visual difference is that brood comb may contain slightly larger cells for drone (male) brood.

In the picture below, you can see that capped honeycomb cells are lighter and the cappings are flatter. 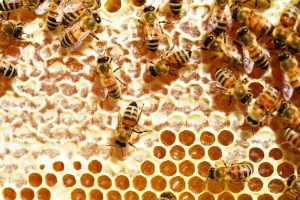 In contrast, capped brood cells are darker (sometimes more golden) and the cappings are bumpy and slightly raised. 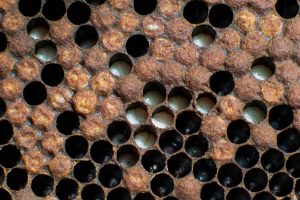 When it is new, wax is a light colour, almost white. As it ages and hive traffic increases over the comb, wax will get progressively darker. 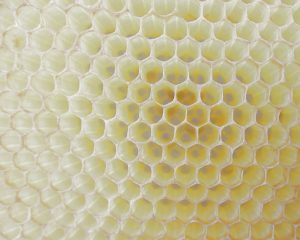 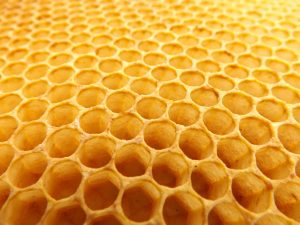 Empty honeycomb cells that have yellowed with age. Photo courtesy of Pixabay.

Bees love aged wax comb. It smells good to them (Yummy bee pheromones!) and they will continue to use this comb, season after season.

Burr comb is essentially just a fancy name for comb that is used to fill a large space in the hive.

Bees do not like big open spaces and they will fill any space deemed too large with wax. 3/8” or less is considered an ideal bee space in the hive as it gives bees just enough room to move about the hive freely. Anything larger than 3/8” will annoy your bees. When left to their own devices, honeybees will rapidly fill large gaps with burr comb to make the space smaller. 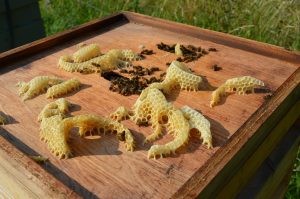 We often find (and destroy) burr comb in the space between the top of our lower brood box frames and the bottom of our top brood box frames. I think our bees are trying to tell us something…

Does it matter what type of comb I use to make beeswax products?

Yes and no. Mostly it depends on what you are trying to make.

If you intend to make candles or balms, for instance, then you want to choose a cleaner, newer source of wax so that you get better colour in your final product. Wax cappings from frames of capped honey or even burr comb can be good for these kinds of products.

The wax from aged comb can be great for products where the final colour is less important, for example, wax polishes. Older comb contains substances like propolis and dirt,which produces a much darker, almost brown colour wax.

To render beeswax is to melt it down and separate out impurities like propolis, bee parts, etc. And, like anything in beekeeping, there are many ways to render wax. The technique you choose will depend largely on how much time you have on your hands and how much equipment you have access to.

Regardless of what method you choose to render beeswax, there are essentially 3 main parts to the process:

Before you begin, you should have a fire extinguisher on hand. Beeswax is highly flammable and you may need to save your house.

Disclaimer Some sites (like this article on Mother Earth News) tell you not to melt wax in your house at all, because of the risk of fire. Although we chose to render our wax indoors, everyone needs to do what is best for them. 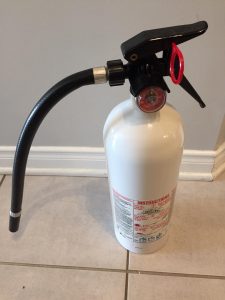 A fire extinguisher at the ready!

Second, wax is hard to clean up, so use old pots and utensils for this task. If you don’t have a scuzzy, sacrificial pot on hand, visit your local Value Village and buy a pot on the cheap.

Now back to the point of this post: our (mis)adventure rendering beeswax…

Because we are thrifty (read: cheap) and eager (read: impatient), we decided on the easiest, fastest and cheapest technique we could find on the inter-webs. So, without further ado, here is it! 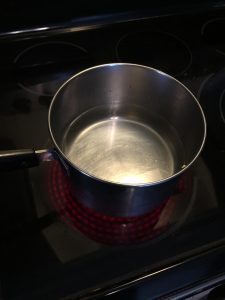 Boiling water in a medium size pot from value village.

Step 2: Place all the dirty wax onto a piece of material to strain it. We used a few sheets of layered cheesecloth. Some sites recommend panty hose. Secure the top of your bundle so that solid wax doesn’t slip out of the top. We used an IKEA baggie clip to seal the top of our cheesecloth bundle. 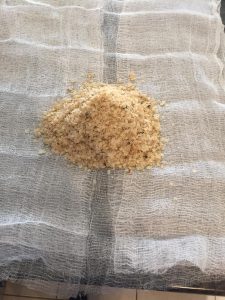 Wax cappings are placed in the centre of a piece of folded cheesecloth. 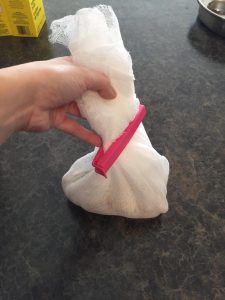 The bundle of wax in cheesecloth is sealed with a clip.

Step 3: Put the sealed bundle of beeswax into the pot of boiling water. You may want to use tongs to hold the cloth bundle as the fabric can absorb hot water and potentially burn your hand. 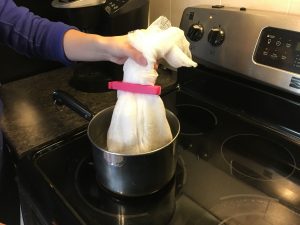 Rebecca puts the bundle of wax and cheesecloth in the pot.

Step 4: Leave the bundle in the hot water until all the wax is melted. As the wax melts, it will seep out of the cloth bundle and into the pot of boiling water. 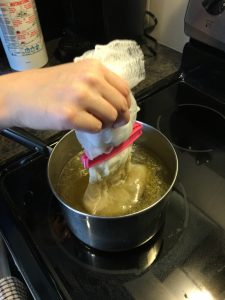 Wax melting in a pot of boiling water.

Step 5: Once you are certain that all of the wax has melted through the cloth, remove the cloth bundle from the pot of water. Put it aside. 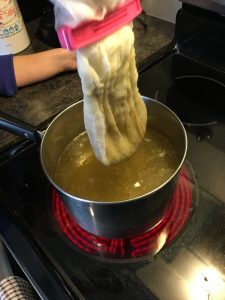 Rebecca lifts the bundle of cheesecloth out of boiling water to see how much wax has melted.

If you open the cloth bundle up, you will see all the leftover grossness.

Step 6: Take the pot of water with the melted wax off the stove. Set it aside to cool. As the water cools, the wax will also cool. Cooled wax will float to the top of the pot and harden into a solid layer/slab of wax. 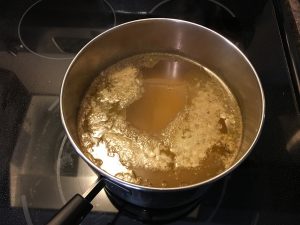 Melted wax rises to the surface of the water where it will cool and harden into a solid piece of wax.

Notice that with this technique, our pot is also our wax mold. 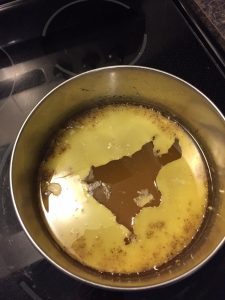 The strained wax hardens in the pot on top of the water.

Step 7: Once the wax is hard (1-2 hrs), push down gently on the slab of wax to loosen it from the sides of the pot. Once it is loose, lift the wax out of the pot, and, tah-DAH! Clean wax!

Based on our research (and a marked degree of wishful thinking), THIS is what we were expecting to get from this process: 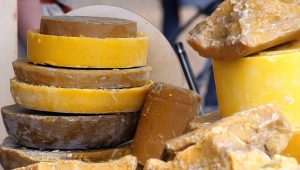 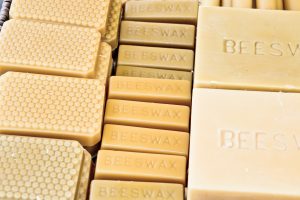 Buutttt…THIS is what we got instead: 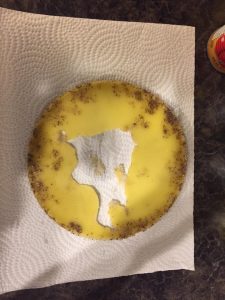 Our final piece of rendered wax is thin and dirty. Not what we hoped for.

Our results: The good, the bad & the ugly

So, good news, everybody: we didn’t start a fire!  Yeah! High fives all around!

And the final product? Well…I’d love to tell you that we got stellar results on our first try, but, alas, ‘twas not the case.

The cheesecloth we used to strain our wax wasn’t fine enough. It filtered out big pieces of debris, but left behind some small debris. When we do this again, we’ll try to strain the wax with a finer material, like nylon stocking, instead.

We also lost some wax during the rendering/straining process since small amounts of wax adhered to (solidified on) the cloth strainer as we pulled the bundle out of the boiling water. This probably isn’t a big deal if you have a lot of wax to start with (you can afford to lose a little), but when you don’t have much wax to begin it felt like beeswax robbery. SOB!

Overall this method is pretty easy. You don’t need any fancy equipment, so it is great for beekeepers on a budget. We’d try is again with a few modifications.

For now, we are going to hold onto the wax we just rendered and re-strain it in the spring/summer when we have more wax to work with.

Lucky for me, Lauchie bought me a few bricks of beeswax for my Christmas stocking this year, so I am going to try my hand at making candles later in the winter. 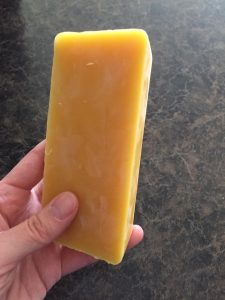 Here’s a bar of beeswax purchased from a beekeeping store.