Our bees survived the winter! 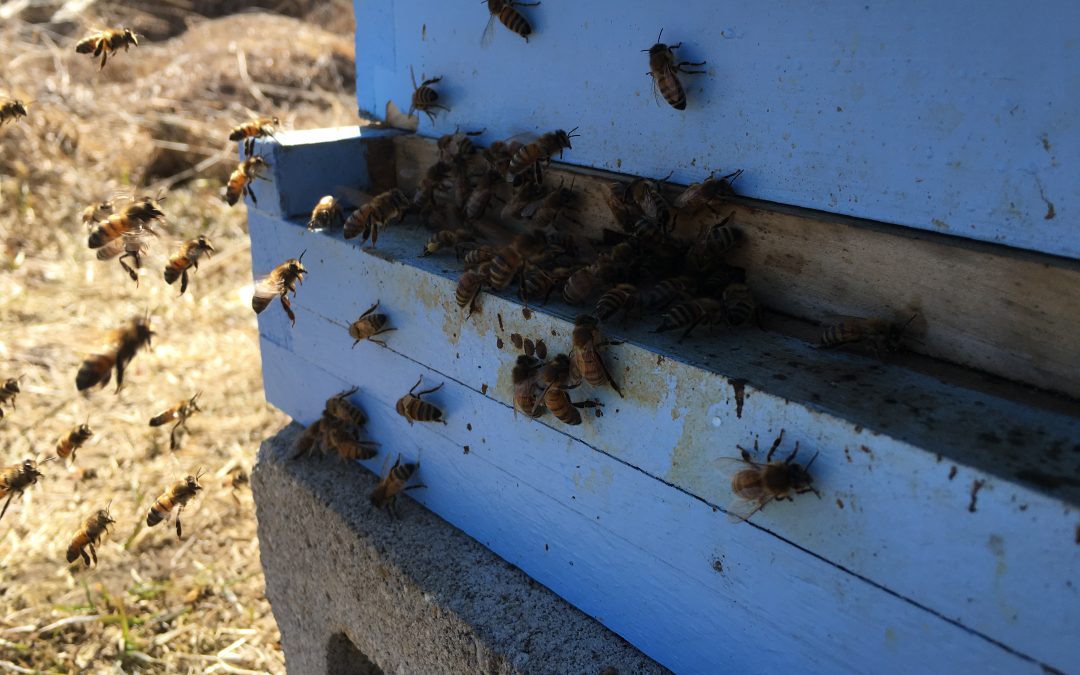 We FINALLY had some nice weather this weekend and both hives are going gangbusters.

Boo‑yah! Happy dance! Waggles all around!

We have talked (written) before about the risk of food shortages during winter and the impact this can have on a colony. This risk was certainly top of mind for us throughout the winter. We monitored as best we could and supplemented their food stores when the temperatures allowed. Here is how we dealt with this risk.

Because there was some robbing late in the fall, we weren’t 100% certain that Sunshine hive and Blue Skies hive had enough food for the winter.

So, during our visits to the bee yard in January and February (to check/clear the entrances of snow), we did a few quick and dirty lift tests to check the weight of each hive.

The test is simple. You just lift the back or front of the hive slightly to check the weight. As the colony eats their winter food stores, their hive becomes lighter. So, in theory, if you do a lift test every so often, you can gauge how much food is left in a hive without actually opening it. By the end of March, I could lift the hives slightly. We knew they were depleting their food supply, but, by how much, we didn’t know for sure.

With this in mind, on a freakishly warm (12 C) day in February, we placed home-made bee fondant in each hive. As warm days occurred throughout the winter, we monitored the fondant status by quickly checking (opening for less than 15 seconds) how much fondant was left. The girls didn’t start to nibble the fondant until early April. We took this as a good sign, since they should have been all over the fondant if they were running out of food.

Note: Making home-made bee fondant turned into the adventure I never wanted to have. Took three batches to get the correct consistency. You NEED a candy thermometer to get it right.

Uber eats in the spring

In early spring, we started to supplement their food stores.

Two weeks ago, we put a pollen patty in each hive and put heaps of dry sugar in the hive (no photos to share. We had to work fast since it was still cold  at 6 C ). Pollen patties help stimulate brood rearing and the dry sugar is used to feed the bees when the temperatures are still low.

Because temperatures were still cool last week (especially at night), we didn’t want to put syrup in the hive. Bees don’t take syrup when it is cold, and adding syrup too early would  just add extra moisture to the hive.

By Friday, temperatures had risen to about 10-13 C during the day, and about -1/0 C at night (and the 14-day forecast for Ottawa suggests temperatures are going to stay in that range for a while). We decided to switch to syrup. On Sunday, we removed the dry sugar, left pollen patties in each hive and added a baggy of 1:1 syrup.

The plan is to continue feeding the bees until dandelions begin to appear, then we’ll stop. 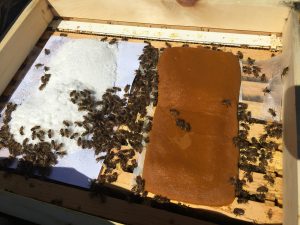 A mound of dry sugar and a pollen patty sits on top of the frames in the hive. 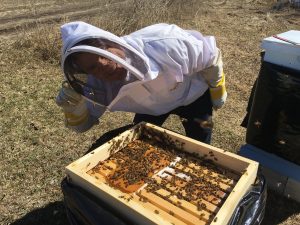 Lauchie inspecting the pollen patties and bees in the hive. 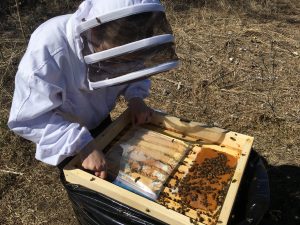 Rebecca adding a bag of syrup to the hive. 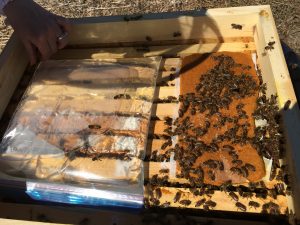 A bag of 1:1 syrup and a pollen patty sits on top of the frames in the hive.

In spite of the relatively cold April weather, there are trees in Ottawa that have started producing pollen. These trees include: maple, cedar, aspen, poplar, juniper, boxelder, elm, and alder. Thank you Weather Network pollen report for this useful tidbit of information!

Looks like our ladies found a source nearby. Here they are bringing in pollen:

Unfortunately, one of the hives in the community apiary did not make it through the winter. It was a mid-summer split—a group of bees taken from a strong hive to make a new colony—that produced its own queen. It took them a while to get going after the split/re-queening and they never really flourished. We feared this colony would struggle during the winter since it was still small and weak in the fall.

Confirming a dead out

Our fears were confirmed when we opened the top cover a few weeks ago.

Throughout the winter, there had been no discernible activity from this hive. Unlike the other colonies in the bee yard, there were no buzzing sounds from inside and no dead bees at the bottom entrance—it was clear that they were not clearing their dead from the hive as expected.

When we opened the hive 2 weeks ago, we saw the dead bee cluster between the frames, in the top-centre of the hive. No survivors in the community hive.

So, knowing this, imagine our surprise when we see bees swarming the “dead” hive as we drove into the bee yard on Sunday.

Turns out, the dead hive still had loads of capped honey inside. Bees from other hives in the bee yard found the stash and began porting the honey back to their hives.

In short, this swarm was just the bees doing our work for us by cleaning out the old frames. All we have to do now is sit back and let them do it.

A puzzle in the ruins

While inspecting some frames in the dead hive, we came across a frame with something unusual. Here’s a photo of the frame. 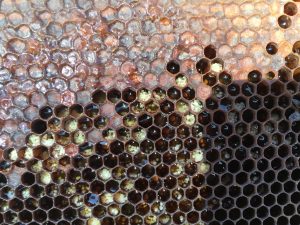 Image of a frame of capped honey with a mystery white residue in the cells.

And here is a close up: 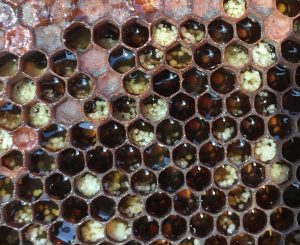 Close up image of a frame of capped honey with a mystery white residue in the cells.

To us, it looked like small clusters of eggs of some description (ew) or possibly chewed wax. Because we weren’t sure, we posted the photo to the OCB Facebook page. The members confirmed that it was crystallized sugar.

So now you know. You’re welcome.

For now, our hives remain wrapped. We are waiting for the night time temperatures to stay above 0 C to unwrap them. By May, hive life will be in full swing!