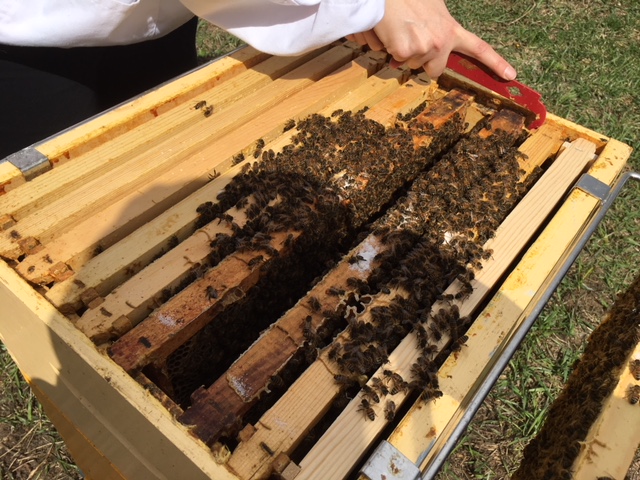 There is never a dull moment around here, folks. We had a beautiful, sunny day on Monday, so we took advantage of it to open up our hives for the season. Here is a recap of our first inspection. We weren’t expecting many surprises, but boy, were we wrong!

Results of the first inspection

As usual, Blue Skies hive was killing it.

Sunshine hive? Not so much.

Even though there has been steady traffic entering/exiting Sunshine hive over the last few weeks, there wasn’t much going on inside the hive. There were lots of adult bees, and a very tiny patch of capped brood (less than 50 cells at the most), but no larvae and no eggs. Sunshine queen is gone. We suspect she died the second week of April, possibly during the freak ice storm. On the bottom board, we found hundreds, if not thousands, of dead bees growing mold.

During the inspection, we scrapped out the moldy bees. Then we added a frame of brood, larvae, and eggs from Blue Skies hive to keep Sunshine hive going while we figured out next steps. Clearly we needed a new queen ASAP.

Obtaining a new queen at this time of the year is challenging. You can allow the hive to re-queen naturally or you can introduce a mated queen.

One option is to let the hive re-queen itself—all they need is a frame of eggs. Although this technique can work well, it’s also a bit of a gamble. It takes 14 days for a new queen to emerge. Once she emerges, she still needs to mate.  It is early in the season, not many drones are flying around to impregnate a virgin queen. Even if she mates with  drones, there is a chance she will be killed before she makes it back to the hive. If she makes it back to the hive, she will still need a few days to start laying eggs. All told, it can take just under a month to re‑queen a hive using this technique.

Knowing this, we decided to buy a mated queen. It will take a few days to introduce her properly to the colony, but once she is accepted by the colony, she will be ready to start laying right away.  Within a week, a mated queen will have the hive up and running again—just in time for the spring honey flow. This is what we want.

Although we prefer local queens, you can’t get local queens this time of year—they aren’t available until June.  So, we did the next best thing and bought an imported Carnolian queen from Chili. There is a beekeeping store down in Port Hope, called Dancing Bee Equipment that brings them in this time of year.

We ordered our new queen on Monday night and she arrived by courier this afternoon. The lady who delivered her to the door seemed quite pleased to drive around town with our little bee this afternoon.

And here she is! Presenting Queen Catalina! 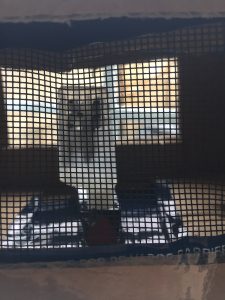 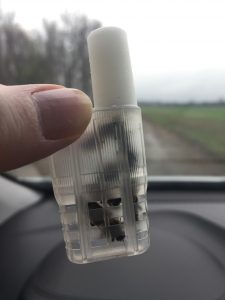 The new queen in her queen cage waiting to meet her new colony.

As soon as our new queen arrived, I rushed out to the bee yard to put her in the hive. There was a brief break in the rain this afternoon, so I jumped at the opportunity.

Full disclosure: Bees hate rain so it’s best not to open the hive when the weather is poor. When it’s rainy the hive will be full of bees (since bees don’t forage in the rain) and these bees will be very annoyed with you. Consider yourself warned.

If you are interested in learning how to add a new queen to a hive, you can read about this process in one of our prior posts, It’s a queen bee bonanza!

Sunshine hive was super pissy about having their hive opened today. As soon as the top box was removed, they exploded out of there and started swarming me. When I pulled the cage with the new queen out of my jacket, they lost their collective marbles. I didn’t even have a chance to put her cage between the frames before they were all over her. There were so many bees, I could barely hold onto the cage. It was actually the first time I have ever been nervous around our bees.

And the reward for my efforts? Three bee kisses. Can you guess which finger was stung? 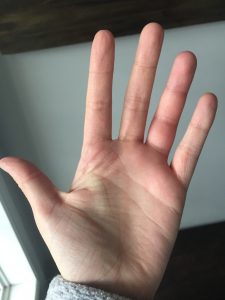 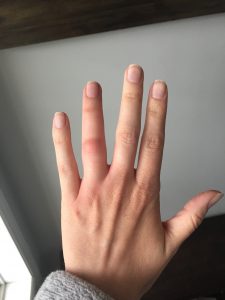 I had to take my wedding rings off because the finger swelled up immediately.

At this point, we must leave them alone and let them get used to her. We’ll go back in a few days just to see if the bees released her from the cage. Then we wait and check back in a week or two. Hopefully, we see eggs and larvae by then!