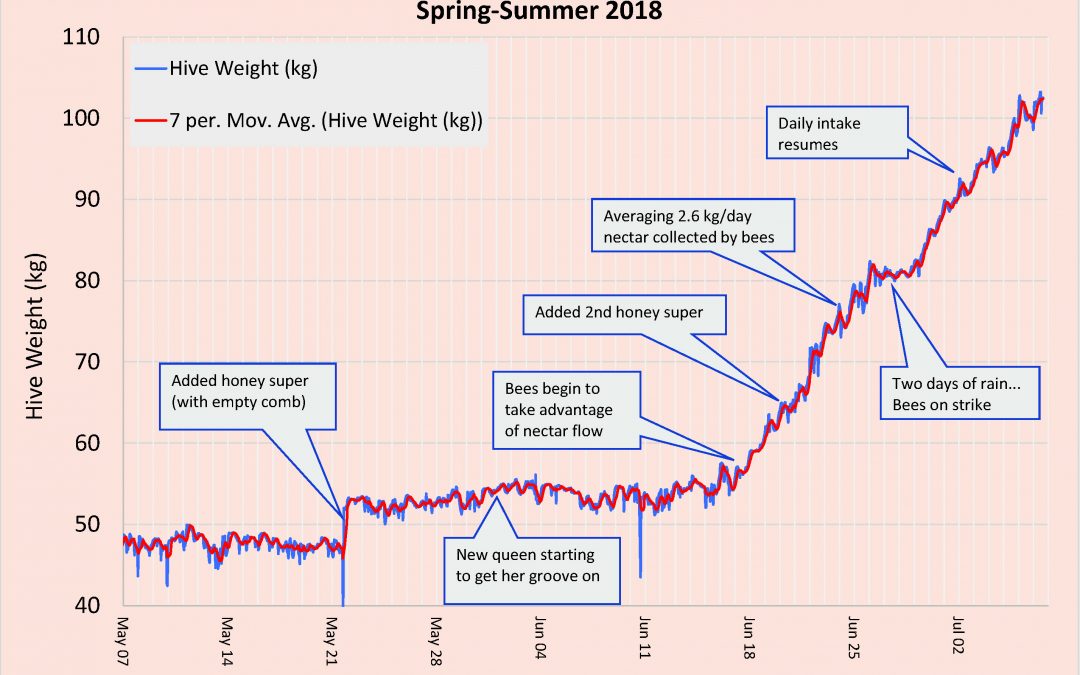 So it’s mid-July and the first major honey flow is starting to dry up. For about 4 weeks—from June 16 until now—our honeybees were bringing in ridiculous amounts of nectar. Just oodles and oodles. We could barely keep up.

To add some context, Lauchie put a weight sensor on Sunshine hive this spring to track/record the hive’s progress. According to the sensor, for the last two and a half weeks, the ladies in Sunshine hive have been bringing in about 2.6 kg of nectar a day. A DAY. I know, right? Craziness. Sunshine hive went from 56 kg to 103 kg in just four weeks. We were putting new honey supers on each week just to keep pace with the flow.

One of the biggest challenges we faced was not having enough drawn out comb to accommodate the amount of nectar our bees were bringing in. Each time we put a new honey super on the hive, we also added 10 new frames of un-drawn wax foundation. It takes time and energy for the bees to make new comb and we can’t help but wonder how much extra honey they could have stored if they hadn’t been forced to make so much comb at the same time.

And here’s a shot of our hives a few days ago. Four honey supers on Blue Skies and three on Sunshine. Yup, they’re big. Blue skies has officially been dubbed “MEGA HIVE” (announce it with your big boy voice), because she is now taller than us and we need a step stool just to work on her. 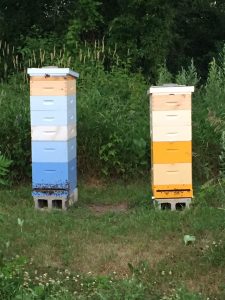 Blue Skies and Sunshine hive. All supered up! 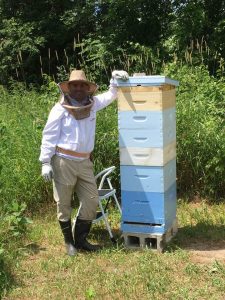 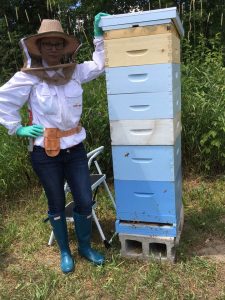 Normally, we wouldn’t let a hive get that tall (because frankly, it is awkward, heavy and probably dangerous), but we wanted to wait until there was enough capped honey in the supers to justify renting an extractor. We plan to do the first extraction this weekend. By then, we expect to have about 24 fully capped frames (roughly 72 lbs of honey). There are still many frames of nectar left in each hive, but the honey’s just not ready to extract yet, so we’ll have to wait until the fall for those ones. 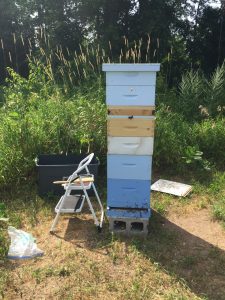 MEGA HIVE! And my stool! Getting ready to take frames out of the top 2 honey supers.

If you remember our post Oh, Honey! from the fall, the last time we extracted honey, we had to brush the bees off our capped honey frames with a bee brush. That process sucked. This time, we put a bee escape on the hive 24 hours before collecting the capped frames, and basically let the bees do all the work for us. 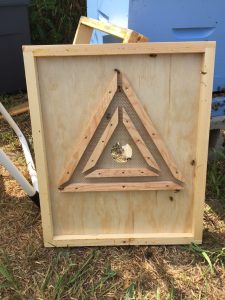 A bee escape basically looks like an inner cover, except that it has a triangle labyrinth on one side of the board. This labyrinth covers the entrance/exit in the centre of the board. This design is supposed to confuse the bees. It allows them to come down from the honey supers, but prevents them from going back up.

We are really not sure why this works. Our bees always manage find their way into inconvenient places, so we don’t understand why a triangle of all things would stump them, but—for whatever reason—it does. And god bless it.

When I opened Blue Skies this afternoon, only about 10 bees or so remained in the two top honey supers. I was able to remove all the capped frames I wanted with very little trouble.

Getting ready to extract

We got 15 frames of capped honey from Blue Skies hive this evening and we are expecting another 7 or 8 from Sunshine tomorrow. On Saturday, we extract and on Sunday, we bottle.

It’ll be a good haul. Let the fun and games begin! 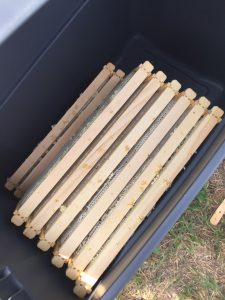 So many frames of capped honey!