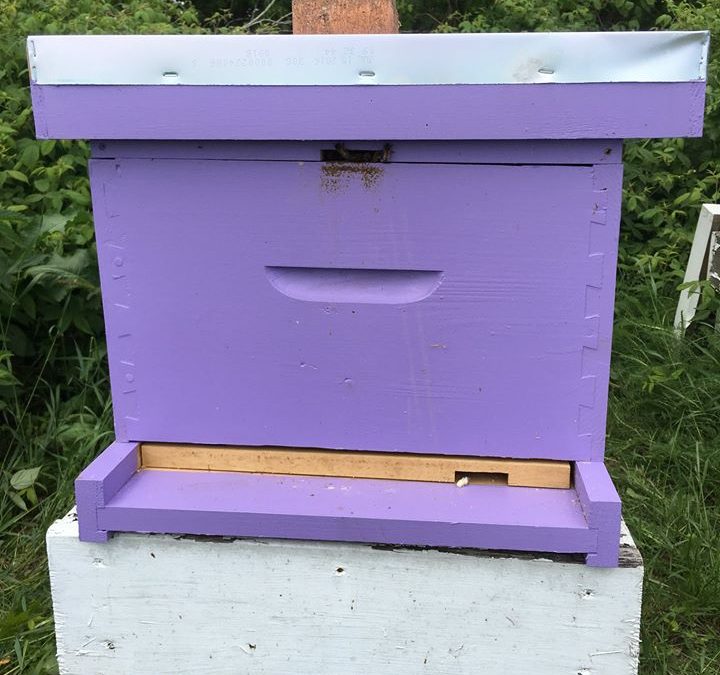 What NOT to do in your bee yard

Last evening, while working in the bee yard, I did something foolish—actually a series of foolish things—that provoked a bee attack that resulted in 18 stings to my knees, butt and thighs. And holy mother on toast and jam, did it ever hurt—like snorting‑a‑gob‑of‑wasabi‑up‑your‑nose type of hurt (for the record, I’ve never done this, but I assume that it would produce a similarly intense burn).

So, as I sit here this evening, nursing my wounds, I thought I’d share this experience with you, if for no other reason than it is a valuable lesson in what NOT to do when working with bees.

Bees are not the enemy

But, before I tell you my little tale of woe, I want to make something VERY clear: Our bees aren’t normally aggressive and they don’t sting unless they have been provoked. I wound up in this predicament because I was a clumsy oaf around a hive. They were trying to protect their colony and nothing more. If you leave honeybees alone, they WILL NOT hurt you. You DO NOT need to fear them.

Here’s how things went down

Last night, Lauchie and I went out to the bee yard to put Mite Away Quick strips (MAQs) on the hives. While Lauchie was whipper-snippering the long grass around the other hives, I decided to get started on the small hive at the edge of the lot. This hive’s honey supers were not very full. I knew it would be easy to lift the honey boxes off the hive and slip a MAQs strip on top of the brood box by myself.

Everything went smooth at first. I opened the hive and removed the top honey super. Bees seemed happy. Then I tried to remove the bottom honey super. It was stuck to the queen excluder with propolis. I used the hive tool as a wedge to break the propolis seal and loosen the honey super from the queen excluder. As I slide the hive tool beneath the box, I heard a gentle sucking pop as the seal broke. Using the tool, I was able to lever the honey super slightly up and down. I tested this on all 4 sides of the box and the seal appeared to be broken all around. I soon learned that I was wrong about that.

As soon as I lifted the second honey super, shit got real. As I lifted the box, the queen excluder, which was still stuck to the bottom of the honey super, broke free of the box mid-air and crashed back onto the brood box hitting a cluster of bees. An explosion of pissed off bees erupted from the hive. Things got real crazy, real fast.

The bees began stinging my legs which was where I had the least amount of protection. The more they stung, the more I screamed and flailed. The more I screamed and flailed, the more they stung. Then I tried to run away which was pointless—an angry swarm of bees just followed. I finally jumped in my car, closed the door, picked bees off my clothes, curled up in the fetal position, yelled as many swear words as I could muster,  then waited for the waves of burning to subside.

Anatomy of a sting

For those of you who have never been stung by a honeybee, it is kind of a three part experience:

It starts with the first pinch and a burn. You are in shock and then denial—did I really just get stung?!? After about 30 seconds, the sensation starts to subside and you think, “Whew! Great! It’s over!”. But, nope—you are so wrong silly man.

Just when you think you have made it past the tough stuff, this when the second wave burn hits you like a freight train. That second burn is deeper, more penetrating than the first round. Second wave burn can last a while, minutes even. You start to feel angry (why me?) and you begin bargaining with the bee gods (Please let this be over soon! I promise to be more careful next time!).

Once the pain stops, the swelling and itching starts. Everyone is different with this part. My swelling peaks at about 24 hours and then gradually fades away. For others, it can last longer or can it can fade much sooner. By this stage, you have reached acceptance: I am a bee keeper. This is my cross to bear in life.

This seems to be a normal experience in non-allergic people. No doubt it is MUCH scarier if you have an allergy.

So, it’s been 24 hours now. The swelling continues, but it has lessened and I have had time to consider the situation more carefully.

The truth is honeybees don’t really want to sting you. It goes against their best interest. If they sting you, they will die, but they will do it if they feel their colony is threatened. And yeah, my actions last night— intended or not—were threatening. Like it or not, I was greeted with an appropriate honeybee response.

So with this in mind, I’ve identified some mistakes that were made in the hope that we can make better decisions next time. Maybe this will help a fellow beekeeper from experiencing the same poor outcome.

Mistake 1: Working on a hive at night

There are good times to work on bees and there are bad times. Wisdom says to bee keep when conditions are better, which is why we normally try to open our hives mid-day, while the sun is shining and the air is still. Bees are happiest on these days. Outside of those conditions, you get what you get.

After monitoring for varroa mites this month, we knew that we needed to put a varroa treatment on our hives. The problem is that we also needed a few cool days in a row to put the treatment strips in the hive. So, we watched the weather and waited for a break in the heat. Monday night presented our first opportunity in almost a month so we took advantage of it. But, we could only get to the bee yard that night.

In hindsight, maybe our choice in timing wasn’t so much a mistake as it was a necessary evil. But, even after making that distinction, I believe that our bees would have been less defensive if we’d opened the hive earlier in the day while there were fewer bees inside.

Mistake 2: Clumsiness with a queen excluder

I blame the queen excluder. It is all the stupid excluder’s fault…

But seriously, I did not take the time to run my hive tool completely under AND over the edge of queen excluder to break the propolis seal. With the metal excluder, this is less of an issue since there is less “give”. It’s firmer and less likely to flex when it gets stuck to a box.

Imagine getting whipped across the bare butt with a wet towel or getting shot at close range with a rubber band. You now have a sense of what that queen excluder did to those bees. Can’t blame them for being pissy now, can you?

I don’t typically use smoke when beekeeping, preferring instead to take things slowly and blow on the bees to get them to go back down in the hive. This generally works under good conditions and I find it is less stressful for everyone. But, this turned out to be a BAD strategy last night.

The problem with bee stings is that once you get stung once, you become a target for more bees. Bee sting venom emits a pheromone that tells other bees nearby that you are a danger to them. If other bees smell this pheromone, they will also attack you, usually in the same spot. It is not unusual to get a few stings at the same time. Puffing smoke at a bee sting masks the scent and disrupts that inevitable chain reaction.

The decision to not use a smoker last night exacerbated an already bad situation. Once the bees started stinging me, I had no way to mask the pheromone smell and those bees just kept coming and coming.

So, while I wish I could tell you I took those stings like a champ (Pfft! Bee sting, bee schming), the truth is that I did not respond to the situation with even a smidgen of dignity or grace. Not one ounce.

Once those bees started stinging, I lost my marbles. There I was, surrounded by a swarm of angry bees, me screaming bloody murder, flapping my arms like a demented duck until I got enough sense in my head to run for the car. By the time I got to the car, I was sweating through my bee suit and wailing about the injustice of it all (why me?? why me?).

While we may never know for sure, I suspect that things could have gone better if I’d stayed calmer, cooler and more collected from the outset.

So, last night sucked, but I’m still alive and ticking.

Confirmed I don’t have a bee allergy, but it also made us realize that we aren’t fully prepared if something goes wrong in the bee yard. We have Benadryl and epi-pens at the house, but we have been lackadaisical about carting them with us to the bee yard. Perhaps, this will be a wake‑up call.

Once we got over the shock, Lauchie joked that this was how Spiderman got his start. So if I suddenly grow a stinger out of my ass and start dancing when you ask for directions—you heard it here first, this is how a superhero was made!